On Tuesdays I'm out of the house from 6:30am to 8pm, so I need a packed breakfast and a packed lunch. And the first day of Plastic-Free July was a Tuesday! I usually have sandwiches for both breakfast and lunch when I'm out and about, so I made these the day before.

The bread came from local bakery Coughlans, sold to me freshly-sliced and packed in a paper bag.[2] I used mayonnaise from a glass jar with a metal lid, rather than butter from a plasticised foil wrapper. Most metal lids are plastic-lined, but as previously noted, I’m treating this as an exception to the rule.

One sandwich contained a sausage from Tuckers, a local butcher on Frith Road. The staff member who served me at Tuckers was very happy to package and weigh my purchase in the compostable bag I took along. He even said he wished all customers were like me!

I wanted to put ketchup and mustard in this sandwich, but the ketchup in my fridge is in a plastic bottle and the mustard has a plastic lid. So I used some “Bombay sandwich spread” that my partner acquired some time back; this came in a glass jar with a metal lid. It’s primarily made from fresh coriander and green chillies, and it is delicious.

My other sandwich contained tomatoes bought loose as “pound a bowl” from Surrey Street Market, plus cheese from the deli counter at Waitrose on George Street.

Buying the cheese turned into a bit of a saga, and wasn’t an entirely plastic-free experience. The staff member who served me had to phone her manager to get permission to cut a piece off a large block rather than selling me a pre-wrapped piece — and even though she was happy to package it in the reusable tub I brought with me, she had to use a piece of “deli wrap” (thin disposable plastic) to pick it up from the slicer[3], and she had to stick a plastic sticker on the lid so it could be scanned at the checkout.

Wrapping it all up

Rather than using clingfilm or foil to wrap up my sandwiches, I used a couple of reusable wraps from Onya. Onya do two types of reusable sandwich wrap: the Wrap-N-Mat and the Onya Lunch. I have the Onya Lunch, which is big enough to wrap half-baguettes and leftover pizza as well as ordinary sandwiches. I haven’t tried the Wrap-N-Mat, but as far as I can tell it's the same thing only slightly smaller (and slightly cheaper).[4]

If you buy via the Onya website, your order will come with minimal packaging, but the outer mailing bag is made of plastic. Although this is a biodegradable plastic (the “Degradamailer”), Onya don’t recommend putting it in your home compost (though they say it “might break down in a commercial anaerobic digester”). So if you’re trying to avoid plastic packaging, you might prefer to buy from a physical shop. Some possibilites near Croydon are Karavan Eco, 167 Lordship Lane, SE22 8HX (about half a mile’s walk from East Dulwich Station) and Kirkdale Bookshop (opposite Sydenham Station) — in fact, one of mine came from Kirkdale Bookshop. It’s also worth looking at the list of stockists on Onya’s website, though note that not all places listed there will carry the sandwich wrappers. 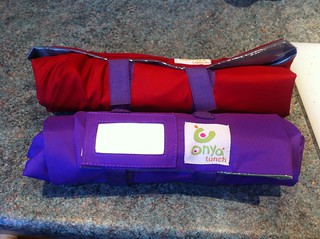 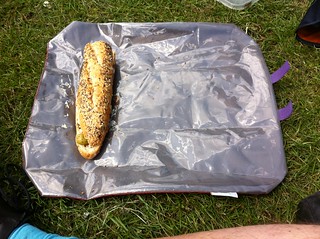