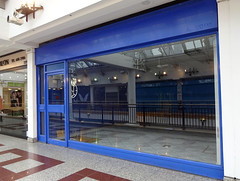 As of August 2012 it was vacant photo, with an advertising display for YC London (which is situated opposite, on the same level).

As of June 2013, it was occupied by The Forum Croydon, an exhibition of Croydon history photo.

As of September 2013, according to Whitgift management, The Forum Croydon had been "temporarily mothballed" until the next year.

As of early 2014 there were plans for a series of theatre performances in the space later that year.