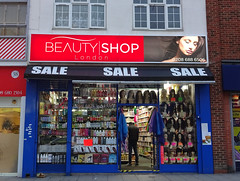 Some time between August and December 2015, a beauty shop called Shaba Hair & Cosmetics photo opened. By July 2016 this had changed name to Beauty Shop London.