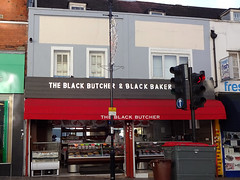 Butchers and bakers on Church Street. It opened in June or July 2017, originally as Khan Halal Meat photo, but by September it had rebranded to Black Butchers photo, and some time between June and December 2018 it rebranded again to Black Butcher & Black Baker. According to a staff member in November 2017, it remained halal.

As well as regular types of meat, it also sells pre-marinaded meat and fish ready for cooking photo, as well as a few prepared meals such as stew peas and macaroni cheese. On the bakery side, it has various loaves and a few patties.

Before the end of 2012, number 21 was occupied by a chip shop called "Chipz & Dipz" photo, though we're not entirely sure if this ever actually opened; in January 2012 there was an "opening soon" sign outside photo, but by July 2012 the premises were padlocked and there was mail piling up inside. As of September 2012 the premises were still empty and a sign had appeared in the window photo offering chip shop equipment for sale.

As of early November 2012 there was a sign up for a business called "Cow & Chicken", advertising itself as selling "American style burgers, hot dogs, subs". As of mid-February 2013, Cow & Chicken still hadn't opened photo, though there was a sign in the window advertising job openings for various staff. Cow & Chicken finally opened photo some time between mid-February and late May 2013. However, it had probably closed again by autumn of that year (as of October 2013 we noted that we hadn't seen it open for a while). It had definitely closed by early January 2014, by which point the premises were vacant with shopfitting work going on inside photo, and one of the workers told us this was in aid of turning it into a phone shop. UK Mobile photo was open by late March 2014 but closed down again in March or April 2017.

By January 2012, number 23 was a Jamaican takeaway called Taste of Jamaica photo. As well as various meals with rice-and-peas (fish, curry goat, etc), this also did Jamaican breakfast (porridge, ackee and saltfish, etc), Caribbean sandwiches (served in coco bread), patties (fish, chicken, veg, etc) and various types of chicken wing. They had two seats for eat-in, but these were tall stools set next to a small shelf for eating off, and there really wasn't much room.

Some time between September and December 2016, Taste of Jamaica was renamed to Jerk & Fried Chicken photo; we don't know if there was also a change of management. This closed down in March or April 2017.

As of April 2017, both number 21 and number 23 were vacant, with building work going on inside including knocking the two shops into one. By May 2017, signage for "Khan Halal Meat" had appeared on the upper-floor frontage photo, and this was open by mid-July 2017.