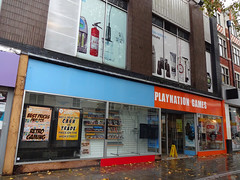 Heart of Gaming and Playnation Games were previously located in part of what used to be Allders, but were forced to temporarily close in mid-July 2019 due to repossession of the Allders premises. By mid-August Playnation Games had reopened on the lower level of 42-46 North End. By the end of the year, Heart Of Gaming had reopened on the upper level and a theatre/events space called The Bonus Stage had opened in the basement photo.

According to an article and photo on page 5 of the 30 January 2008 Croydon Guardian ("Store's lift ruling floors busy mums"), as of that date the premises were occupied by a branch of George (the ASDA clothing brand). This may have been the same branch that another article on page 20 of the 15 October 2003 edition ("George helps cast net wider") describes as George's "pioneering flagship store [which opened] in Croydon's Whitgift Centre in September".

By January 2012 it was a branch of Clas Ohlson photo of North End entrance, photo of Whitgift entrance, but this closed down for good on 16 August 2018 photo of notices. The premises were vacant as of late August 2018, and still vacant as of May 2019.