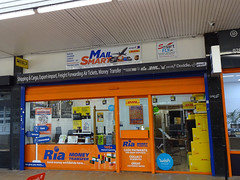 It was previously at number 19, but moved here in August or September 2018 due to redevelopment of that part of the block photo of notice.

Numbers 29-31 were previously occupied by a discount shop called Discount People/G Pound Zone photo, but this closed down some time between May and November 2016.

By October 2017 number 31 was occupied by an electronics shop called Orbis Outlet photo, which had previously been at number 29 photo. This was gone by September 2018.