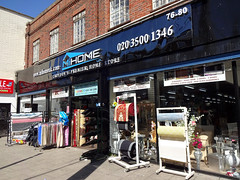 Homewares and furniture shop on Church Street. It opened some time between June and August 2018. According to an email from the new management (April 2019), it had a change of management in March 2019.

By July 2012 it was just called Homestyle photo, later photo. As of November 2017, there were signs in the windows stating that Homestyle was closing down photo, and according to a member of staff this was likely to happen some time in December. When we went past in March 2018, the sign was still there but the shutter was down.

As of May 2018 there was a notice on the shutter stating that a new shop would be opening there and sales staff were required photo. A homewares shop called Mi Home UK opened some time between June and August 2018.