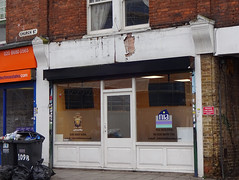 Housing company on Church Street, focusing on providing semi-independent housing to young people leaving care. According to a member of staff in December 2019, the company has five homes around Lewisham and Croydon, and this is its head office.

According to a photo on Flickr, as of December 1990 the premises were occupied by Tots Off Licence.

According to Google Street View, as of July 2009 it had signage for Simmans Recruitment (likely connected to Simman Solicitors at number 107 next door). This had gone by September 2012 photo.

As of August 2015 it was under renovation photo. Someone inside in December 2015 told us it was due to become an independent estate agency, but we aren't sure when or whether this opened.

As of March 2018, it had acquired signage for Bentley Benson & Co accountant and tax advisors photo, but the shutter was always down when we went past. In October 2018 we saw activity inside but didn't check whether this was actually Bentley Benson & Co. In December 2018 the Bentley Benson signage was still up but there were also decals on the windows for Nia Housing and Delamove photo.

When we knocked on the door in December 2019, the person inside told us that it was the head office of Nia Housing.