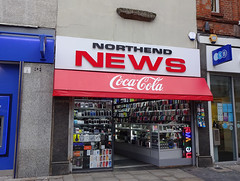 Mobile phone and phone accessories shop on North End. It was previously a newsagent (hence the name), but in late 2019 it switched to focusing on mobile phones and accessories. According to a member of staff in December 2019, this was because the newspapers weren't selling well and they kept having to send most of them back.

Until October 1985, this address was the site of the Odeon Cinema (previously the Picture House, previously the Electric Cinema). According to Janet Smith's interview with Steve Grant, the owner of Northend News, broadcast on the 26 August 2012 edition of the Croydon Arts Show (now sadly unavailable due to deletion of the Croydon Radio website), the present building was constructed some time around the start of the 21st century in the area previously occupied by the cinema foyer, and part of the old ceiling is still visible in the storage area above the shop.