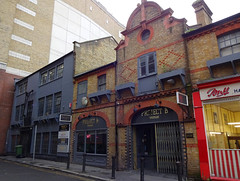 As of December 2019 it operates as a private hire venue only.

The premises were previously occupied by Beano's second-hand record shop (see Wikipedia entry and a photo of it in 2009). After Beano's closed, the building spent a short spell as an "undercover market" called Stuff photo; see Retro Chick blog post.

By July 2012 it was a child-friendly cafe and children's indoor playspace called Beanies photo. The playspace moved to a space in the Whitgift Centre around the end of 2014, though the cafe continued to run. By March 2015 there was new signage up for Project B (run by the same people as Beanies).

As of July 2016 the ground floor was used as an evening-only bar, while the owners looked for a new daytime cafe operator to replace Buttercream Dreams. We aren't sure if the cafe ever did open again.

By December 2019 the space was operating as a private hire venue only.