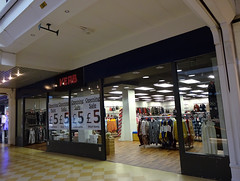 Clothes shop on the lower level of the Whitgift Centre. It opened some time between October and December 2019.

The unit was vacant as of July 2012, with signage indicating that it was previously occupied by Clinton Cards (who now operate only from the upper level of the centre, in units 1024-1028 on Upper Mall).

As of late September 2016 there were signs up saying a branch of Tapi Carpets would be opening here. This was open by mid-November photo from April 2017 but closed down again some time between April 2017 and July 2018.

In mid-2018 it was used as a pop-up boutique called All About Me photo, aimed at providing retail experience to people with disabilities. This launched on 23 July 2018 and ran for four weeks, until Friday 17 August.

It was vacant as of October 2019 photo, but by December 2019 a clothes shop called Verb had opened.