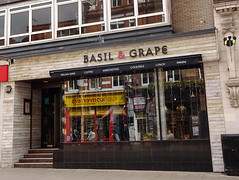 Italian wine bar on George Street. It originally opened on 30 June 2018 as a franchise of the Veeno chain photo, but became independent and changed its name to Basil & Grape some time between October 2018 and May 2019.