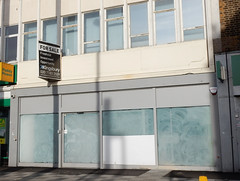 Business premises on North End, near West Croydon Station. Vacant as of July 2015. Still vacant as of late October 2015.