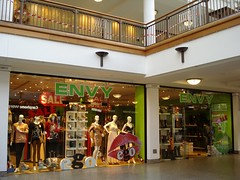 A new clothes shop called Envy has opened on the lower level of the Whitgift Centre next to WHSmith (where Monsoon used to be before it moved elsewhere in the Centre).

A beauty salon called Friends Hair & Beauty is in the process of opening at 37 Surrey Street (previously Cyberspace Internet Cafe).

SLVR at 34 Surrey Street (where Rehab used to be) will be having its grand opening event on Friday 31 January from 9pm.

Finally, shopfitting work is going on at 94 High Street (where World News used to be), though there are no clues as to what it will be when it opens.