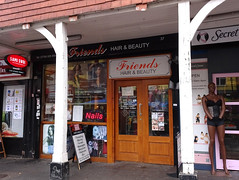 Hair and beauty salon on Surrey Street. It opened in early 2014.

It was previously occupied by CyberSpace Internet Cafe photo, which moved up the road to number 51 in October 2012 (but then closed again).

As of October 2013 it remained vacant and shuttered.

As of early January 2014 there was shopfitting work going on inside photo taken through window, with a sign in the window advertising for a nail technician, and a sign had appeared above the frontage reading "Friends Hair & Beauty".