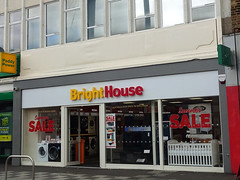 Around June or July 2017, a hire-purchase furniture shop called Bright House (pictured) moved here from its previous location at 145-147 North End. This was still in place in December 2019.