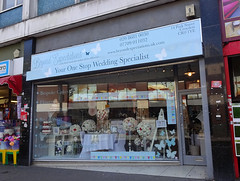 Number 14 Park Street was demolished in 2019 as part of the Queens Square development.

By October 2013 it was a wedding planners called Beyond Expectations photo, but in August or September 2018 this was forced to move due to redevelopment of the entire block photo of notice. According to their Facebook page as of October 2018, at that point they were operating from Amp House on Dingwall Road.

The premises were vacant as of October 2018, and demolished by October 2019 photo.