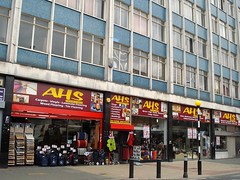 Numbers 6-12 Park Street were demolished in 2019 as part of the Queens Square development.

By October 2013 they were occupied by a furniture and furnishings shop called AHS photo, which according to the frontage stocked rugs, carpets, furniture such as beds and sofas, curtains, flooring, and bedding.

AHS was forced to close in August or September 2018 due to redevelopment of the entire block photo of notice. The premises were vacant as of October 2018, and demolished by October 2019 photo.