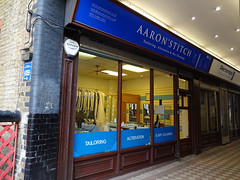 It moved here in August/September 2018, having previously been at 37 High Street under the name of Stitch & Thimble.

It was previously occupied by a games shop called M & M Games photo, but in early November 2013 this changed its name to Playnation Games and moved to 17 High Street photo of sign. The premises remained vacant from then until April 2015.

As of March 2015 a sign had appeared on the shutter photo stating that an internet cafe called Outside In would be "opening soon". This was open by April 2015 photo, but closed again in September 2015 photo of sign.

In August/September 2018, it was taken over by Aaron Stitch, a clothing alterations and dry cleaning place that was previously at 37 High Street under the name of Stitch & Thimble photo of notice.