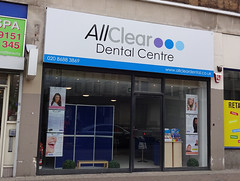 Dental practice on Wellesley Road. It was previously in the Whitgift Centre, but relocated here around March 2017.

As of July 2012, the frontage still read "kdesigngroup" (the previous occupants) photo, but signs in the window photo indicated that an a firm of immigration lawyers called London Visa were the new occupants. According to a sign in the window in July 2014 photo, London Visa later moved to The Old Met Life Building, 22 Addiscombe Road, CR9 5AZ.

As of August 2015, All Clear Dental Ltd had been granted planning permission (ref 15/02974/P) to use the ground and first floors as a dental surgery, and signage for the business was up by late November 2016. Previously in the Whitgift Centre, this firm relocated to Wellesley Road around March 2017 due to the impending redevelopment of the Centre photo of notice.