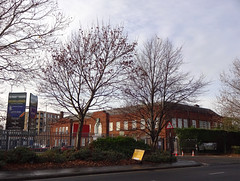 Army centre on Mitcham Road (the "Army Reserve" is what used to be called the "Territorial Army").

As of December 2019, the Ministry of Defence website states that it's used by the Royal Electrical and Mechanical Engineers, the Royal Yeomanry, and the Parachute Regiment; it also appears to be occupied by a military training school called MPCT.