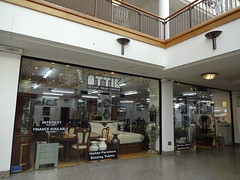 Italian furniture shop in the Whitgift Centre. It spans both the lower and the upper level of the centre photo of upper level, but the entrance is on the lower level. It opened some time between August 2018 and July 2019.

Until December 2012, the unit was occupied by a branch of Monsoon clothes shop photo, but early that month Monsoon relocated photo of sign to a double unit on The Mall, numbers 101-102. This unit remained vacant as of June 2013 photo and as of September 2013.

The next occupant was a clothes shop called Envy photo, selling boots, jeans, fancy shoes, and going-out clothes. According to a member of staff as of January 2014, it opened in December 2013. Although this is a two-level unit (and Monsoon occupied both levels), Envy only used the lower level (and according to the same member of staff, they didn't know yet whether they'll be taking on the upper level too). They never did take on the upper level, and closed down again some time between January and May 2016.

As of May 2016 the unit was being used to display plans for the impending redevelopment of the centre photo.