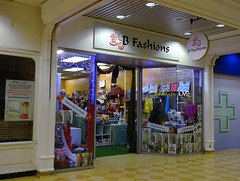 Haberdashery on the lower level of the Whitgift Centre. It opened in December 2015.

It sells fabric, sewing and embroidery thread, trimmings, Dylon dyes, knitting yarns and needles, and so on.

The unit was previously occupied by a picture framing shop and art gallery called Picturama photo, but this closed some time between June 2013 and September 2013 photo.