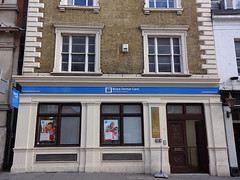 Dentists on the High Street. It moved here from the upper floors of 80 North End in April 2018.

It was previously an NHS walk-in centre, but was vacant and advertised to let (PDF) by July 2012 photo.

In June 2017, planning permission was granted for use as a dental practice.