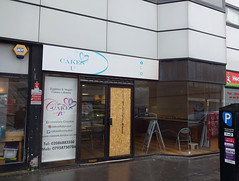 Cake shop in Centrale, with a frontage on Keeley Road.

It was previously at 18 St George's Walk but was forced to move in 2018 due to redevelopment of the block. By February 2019 it had reopened here.

The unit was previously occupied by a patisserie called Le Petit Pain photo. However, this closed down some time between July 2015 and November 2016.

As of November 2016 there was a sign in the window photo saying it was closed until further notice. However, there were still bottled drinks in the fridge inside, and they appeared to be clearing the post away photo, so it seemed possible that it might reopen at some point. However, it was still closed as of April 2017, and by June 2018 it was stripped out inside photo. It was still vacant as of December 2018.