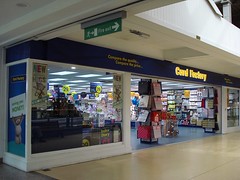 Card and gift shop on the upper level of the Whitgift Centre.

It was previously a few units down at number 1104, but moved to the current larger premises some time in the latter half of 2012.