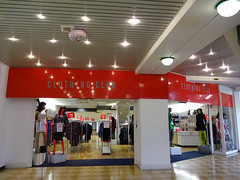 Clothes shop on the lower level of the Whitgift Centre. It opened some time between August 2018 and October 2019.

This unit was previously occupied by a branch of the mobile phone shop chain Phones 4 U photo, but the chain went into administration in September 2014, and all its stores were closed. The unit was still vacant as of June 2015 photo.

In late 2015, a furniture shop called Home Living photo moved in. This had previously been at 34-36 North End. However, it departed again some time between May 2016 and April 2017.