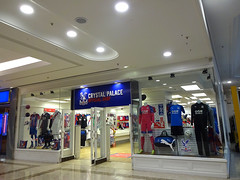 Football merchandise shop in Centrale. It opened in November 2018 and was originally due to remain open only until the end of January 2019. However, as of October 2019 it's still open.

As of July 2012, the unit was occupied by a toy shop called Little Angels. By October 2012, this had been replaced by Evolution photo, a gift shop aimed at the ethical shopper market. Evolution closed some time between November 2013 and April 2015.

A clothing and accessories shop called Limelight photo opened some time between September and November 2016 but closed down again by April 2017. The unit remained vacant as of November 2017.