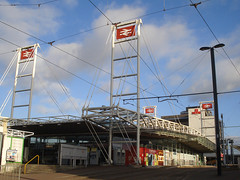 One of Croydon's rail stations (and one of London's major stations).

Southbound services go to places like Purley, Caterham, and Coulsdon, and further afield to places like Gatwick, Luton, Horsham, Reigate, and Brighton.

There are also coffee and refreshment facilities on the platforms.