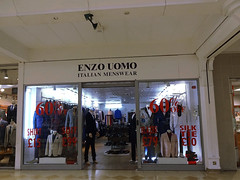 Clothes shop on the lower level of the Whitgift Centre, specialising in suits. It opened in August 2018.

It was previously a branch of Vodafone photo, but this closed down in February 2017 photo of sign.