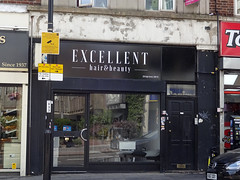 Hairdressers and beauty salon on the High Street.