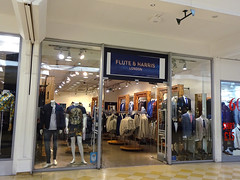 Clothes shop on the lower level of the Whitgift Centre. It was previously part of Croydon Village Outlet, but moved here by October 2019.