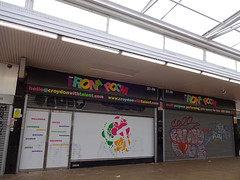 Performing arts space on St George's Walk. It opened some time between October 2017 and June 2018.

It was previously a YHA Adventure Shop and then a Relief Fund For Romania (RFFR) charity shop photo. As of July 2015 the interior had been stripped out, and by late September 2015 it had been taken over by Home Again photo, which was previously at numbers 40-44. (The RFFR charity shop moved a couple of doors down to number 33.)

Home Again was a second-hand furniture and white goods charity shop which accepted donations of furniture, white goods, and electrical items, and resold them at intentionally low prices with an extra discount for people on benefits. The last time we saw it open was in May 2016, and according to a member of staff at Rokka Sheek, a few doors down (June 2017), it closed down in summer 2016.

The premises were still vacant as of June 2017, but by October 2017 there was signage up for something called The Front Room, and by June 2018 this had opened as a performing arts space.