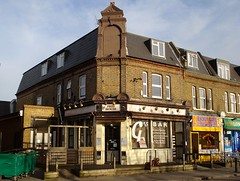 It was previously called the Derby photo, and before that the Derby Arms. G's Bar photo opened in July 2012.

As G's Bar, it had seating outside on wooden decking, as well as more seating and a DJ station inside. According to a flyer picked up in August 2012 photo, they had a drum 'n' bass/jungle night every Thursday evening. As of August 2012, they served Caribbean food such as stew chicken, jerk chicken, and curry goat (possibly only one option per day). See also photograph of a flyer from January 2013.

According to a bailiff's notice in the window, dated 28 August 2013 photo, possession of the premises has passed back to the landlord. It was vacant as of September 2013, and still vacant as of March 2014.

By April 2017 it had been converted into housing.