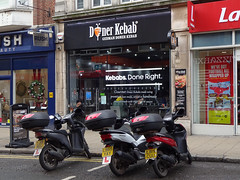 Doner kebab shop on George Street, part of an international chain which originated in Berlin. It opened in November or December 2016.

It was previously a stationers called A To Z Office Centre photo, but this moved across the road to number 28 in October or November 2016.

See old photo of the frontage as of May 2012