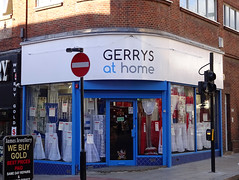 Curtain shop on the corner of Church Street and Frith Road, previously known as Clive Mitchell.

It was previously known as Clive Mitchell, and according to a photo on Flickr, had been here under this name since at least c. 1985 (most easily visible at original size).

By July 2012, the name had changed to Gerry's At Home, though the Clive Mitchell facade photo remained until at least early 2015. However, by December 2015 a new shopfront reading "Gerrys [sic] At Home" had been put in place as part of the Connected Croydon public realm improvement programme.