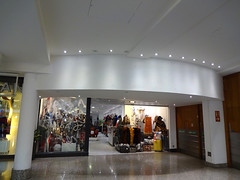 Luggage and bag shop on the lower level of the Whitgift Centre.

A hairdressers called Hectik Hair opened on 7 May 2014 photo, but closed down again around January 2018. The unit was still vacant as of August 2018.

As of October 2019 it was being fitted out to open as a bag/luggage shop called Handbags and Travel Goods photo; this was open by the end of the year.