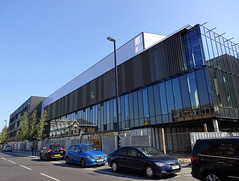 School on London Road, catering for students from Year 7 through to Sixth Form.

It initially opened in September 2014, housed in temporary portacabins on the site previously occupied by Croydon General Hospital. Over the next few years, permanent buildings were constructed on the now-cleared site, and the school moved into these in September 2017.