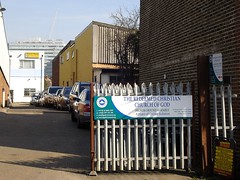 Building just off Pitlake. It was previously called Mission House and occupied by Higher Ground Assembly, a Christian church forming part of the Redeemed Christian Church of God. However, as of April 2017 the church has moved on and the building photo is now occupied by the Al-Khair Foundation, which also runs a primary school just down the road.