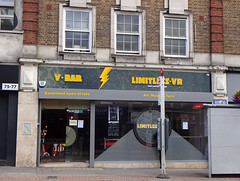 As well as virtual reality sessions, it also does drinks (but no food other than things like crisps and nuts).