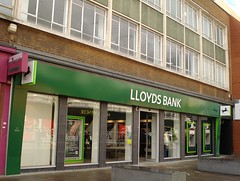 This branch relocated from Unit 60-61 in the Whitgift Centre in October 2013 (see photograph of sign announcing the move).

The October 1984 Caterham & Reigate phone book lists Ponderosa Steak & Salad Restaurant at this address, and a comment on Flickr confirms that Ponderosa was at these premises.

Later it was a branch of HMV photo — according to a report on page 18 of the 27 July 1990 Croydon Advertiser, this opened in August 1990 (the report says it was due to open on Monday 6 August).

As of December 2011 it was a discount/factory seconds clothes shop called Brand Centre photo. Brand Centre had closed by July 2012, at which point the premises were vacant and covered with scaffolding photo.

A discount clothes shop called Megamart photo opened on the premises in October 2012, but as of early February 2013 Megamart had closed and the interior was stripped out and vacant photo.

In March 2013 Lloyds Banking Group were granted planning permission (ref 13/00028/P) for use of the premises as a bank. The covering letter attached to their application stated that they intended to relocate their current Lloyds TSB branch at Unit 60-61 in the Whitgift Centre to this location.

As of mid-June 2013, building work was in progress photo, and as of early August 2013 there was a sign up stating that the Lloyds branch is "on its way" photo. As of September 2013 the new frontage and cash machines had been installed photo, and it finally opened in early October 2013.