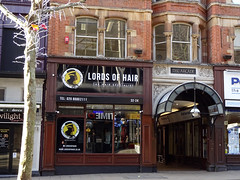 Hair and wig specialist on the High Street. It opened in late 2019.

It was previously a branch of Doughmasters "rolled sandwiches" chain (as of July 2008, according to Google Street View), but this closed down by May 2012. Croydon's other Doughmasters branch continued in existence at 4 Suffolk House, George Street until June 2016 before closing down in turn.

Some time between May and July 2012 it became a branch of Subway photo. This closed some time between March and June 2017, and although an email from Subway head office claimed it would be reopening at some point, we never saw it open again. By June 2018 the unit had been stripped out and was advertised to let photo. It was still vacant as of October 2018.

As of October 2019 there were signs up stating that a business called Lords Of Hair would be opening there soon.