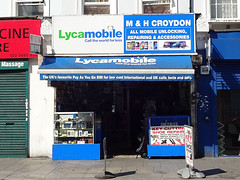 For history up to March 2014 (at which point it was Khan Mobile), see The Past and Present of Croydon's London Road.