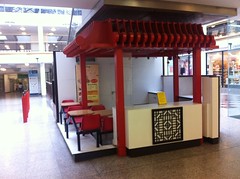 Previously a kiosk on the lower level of the Whitgift Centre, this was vacant as of June 2014 and removed completely by June 2015.

It was previously occupied by Maidin Chinese Bakery photo, but this closed some time between September 2013 and June 2014 — though it continues to trade from the Wing Yip Centre photo of sign.