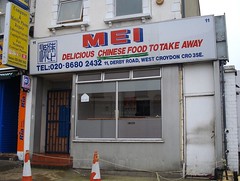 Chinese takeaway on Derby Road near West Croydon Station. They also do delivery, with online ordering via Just Eat.

As of early January 2013 they only took cash, not cards, for ordering in person; we're not sure if this is still the case.

According to a photo on Flickr, as of c. 1985 the premises were occupied by a Chinese takeaway called Ka Ho (most easily visible at original size). According to another Flickr photo, it's been called Mei since at least February 2009.

Photos of takeaway menu collected in October 2012 (under the new management): page 1, page 2 and cover.

It changed hands some time around October 2012, and the menu changed too. It closed for refurbishment a few months later, but reopened in March 2013.