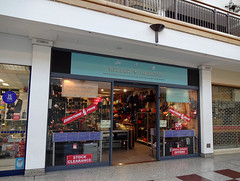 Bags and accessories shop on the lower level of the Whitgift Centre. It opened some time between August 2018 and October 2019.