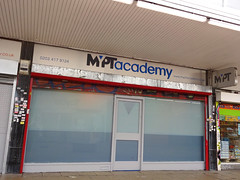 Business premises on St George's Walk. As of April 2017 it seems to be part of My PT Studio a few doors down.

It was previously a party shop called Masquerade photo, but this closed down some time between May 2016 and March 2017. According to the Masquerade website, the shop moved to Rye.

As of March 2017 it was vacant but there was building work going on inside photo.