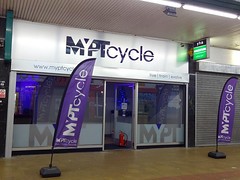 Exercise studio on St George's Walk. The company also has larger premises on the other side of the arcade at numbers 40-44.

This one opened some time between August and December 2014, initially under the name My PT Studio photo, and remained open under this name until at least April 2015. As of September 2015, it was under refurbishment to become a dedicated spin studio, and by December 2015 the name on the frontage had changed to My PT Cycle.

It was vacant as of July 2012 photo. According to Citikey Directories, before that it was a cafe and sandwich bar called Phil's Café.

A Hungarian deli called Little Hungary photo opened on the premises towards the end of March 2013, but closed again in mid-2014 photo. (Note: although in these photos the frontage still says "sandwich bar", this was left over from the previous incarnation — Little Hungary didn't actually sell sandwiches.)

Some time between August and December 2014, My PT Studio (which already had premises a few doors up at number 43) opened a second location here.