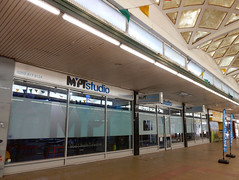 Personal training gym on St George's Walk. It was previously at number 43 opposite, but moved here in mid-2015.

The premises were previously occupied by a second-hand furniture and white goods charity shop called Home Again photo, but in 2015 this moved across to numbers 37-39. According to a planning application granted in May 2015, this move was due to the expiry of its lease.

In early 2018 it expanded into part of the old Blue Orchid nightclub (see Croydon Advertiser article), but the entrance remained in the same place on St George's Walk.