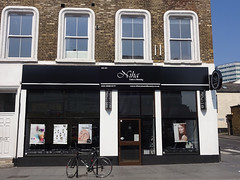 Hairdressers and beauty salon on London Road. It moved here from 181a North End in July or August 2016.

See The Past and Present of Croydon's London Road for history up to late 2014, at which point the premises were occupied by a nail salon called White Sands.

White Sands opened in early 2014. It also offered special-occasion packages including hair styling, makeup, limousines, and photography photo of sign. Complimentary wine, hot drinks, and cupcakes photo were available for customers. This closed down around October 2015. According to an email to the White Sands mailing list, the closure was "Due to the impending Westfields development and consequent demolition of the Whitgift Centre".

The premises remained empty until Niha beauty salon moved here (from 181a North End) in July or August 2016.